I thought yoga was not as physical, Maria said after his first session of Ashtanga Vinyasa Yoga, “thought it was much quieter.”
Generally is ignored that yoga has physical and dynamic variations, including Ashtanga Vinyasa Yoga, a technique to improve the energy and get physical inner calm.
Like any style of yoga (which in Sanskrit means “union”) promotes the welfare of the individual, but difference in others with the vinyasa practice, a system of movements and synchronized breathing. These movements act of common thread between the postures (asanas) and allow a fluid and dynamic practice.

The continued practice of Ashtanga Vinyasa Yoga strengthens and stylingt he body and provides a serene state of mind and purifies the body, mind and emotions.

Its benefits are innumerable and it has become one of the styles of yoga in the West fashionable, being its origin in India,
from a text called Yoga Kurunta over a thousand years old. People with very different lifestyles practice it regularly.

This is a demanding activity, since it requires tenacity, endurance and concentration, but anyone can start, the only requirement is to be consistent and patient.

Maria had practiced various sports, including swimming, spinning and jogging, but could not get “hooked” to none.
She began Yoga in a time when she suffered a lot of stress.

“I had provoked a rise in cholesterol, anxiety and tension in the back, and I could not improve. It was to start doing yoga and relax achieve, “explains. “It balanced me everything.”

She is a year and a half practicing Ashtanga Vinyasa Yoga and has noticed many changes, physical and mental and emotional. Most notable: a change in body posture, the disappearance of internal and external tensions, strengthening the abdominals, improved circulation and digestion, increased concentration and, most importantly, the disappearance of stress.”After a few months practicing Ashtanga Vinyasa Yoga, I noticed there was created a resilience to stress, and things did not affect me if they had done before. I felt much better. “

The changes that the practice causes in the body and mind are immediate if the practice is continued (recommended to start with a minimum of two sessions per week). Most physicists are detectable rapidly: the body is stylized and slightly musculature. “It was the first thing I noticed, it tones the body from head to toe,” says Maria. Also rapidly improving posture, flexibility, coordination and strength. 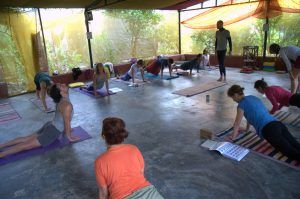 Over the medium term

From a internal point of view, the practice of Ashtanga increases concentrating ability, vitality and energy, which achieves a healthy physical and mental state and awake. Over the medium term, helps to release tension, relax the mind, reduces stress and balances the metabolism, improving significantly the digestive process, constipation, circulation and to fall asleep. Over time, dissolve emotional blocks and even get to observe mental processes from the detachment, without judging them or identify with them.

How is a session

A student who begins in Ashtanga need not have practiced yoga before or have specific skills. Sessions can be guided (teacher explains the sequence) or, when the positions are known, Mysore style (student practice at your own pace and the teacher corrects him).

In either case, the structure of the practice is always the same: repeating the same sequence of asanas and, as the practice progresses, the professor adds new positions. Each asana prepares for the following: develop strength, flexibility, and balance needed to continue.

The session starts saying a mantra in Sanskrit which expresses the desire for health and prosperity, followed by sun salutations to help heat and purify the body, standing postures, which provide strength and stability; sitting postures, which intensify the practice, and the finals, which are used to restore balance and harmony. It is recommended relax at least 10 minutes after the practice to assimilate its benefits.

Apart from with the vinyasa, union of breath and movement, the essential principles of Ashtanga are combining calm and regular breathing (Ujjayi) with abdominal and pelvic floor muscle contractions  (bandhas), and fixed focus point of gaze (drishti).

Knowing the series, without having to go to the teacher or to think what position follows, lets you concentrate on the rhythmic and regular breathing, which automatically quiets the mind and paralyzes the continuous thoughts that come to mind and that at generally constitute the most frequent cause of stress. With regular practice of ashtanga Vinyasa Yoga yoga are achieved eliminate internal and external tensions, to focus on the now, and get well as difficult to realize the “live and enjoy the moment.”

In our Teacher Training Courses  Merkhaba Association incorporated the Ashtanga Vinyasa Yoga, as part of our training program, for its multiple benefits at all levels.